The Danish Eulerian Hemispheric Model (DEHM) is a state-of-the-art, three-dimensional, atmospheric chemistry transport model (CTM) developed to study long-range transport of air pollution across the Northern Hemisphere. DEHM was originally developed in the early 1990's in our modelling group in order to study atmospheric transport of sulphur-dioxide and sulphate into the Arctic (Christensen, 1997). The model has been modified, extended and updated continuously since then. The original simple sulphur-dioxide-sulphate chemistry has been replaced by a more comprehensive chemical scheme, including 73 chemical species, 9 primary particles and 158 chemical reactions. The DEHM model has also been used for studies of additional components, including POPs, mercury, pollen, CO2 and ultrafine particle.

The model includes descriptions of the atmospheric transport and mixing, the chemical processes as well as the removal by rain and the deposition/removal to land and water surfaces. Natural emissions of e.g. sea salt and biogenic VOC’s are calculated on-line in the model, while maps of anthropogenic emissions are based on a number of international (e.g. EMEP) and national inventories.  For Denmark the high-resolution (1 km x 1 km) emissions from the SPREAD model is applied.

The model domain covers most of the Northern Hemisphere, discretized on a polar stereographic projection, and includes a two-way nesting procedure with several nests, allowing for higher spatial resolution over selected areas. The setup is flexible and can change from study to study (see Fig 1).

The most applied setup includes three nested domains with higher resolution over Europe, Northern Europe and Denmark. Currently the finest resolution is 5.56 km x 5.56 km for a domain covering Denmark. The vertical discretization is defined on an irregular grid with 29 layers up to ~18 km. The thickness of the lowest layer is 15–25 m.

The DEHM model has been developed and applied as a part of the Danish Air Quality Monitoring Programme for more than 10 years – with focus both on chemical species important for human health (ozone, NO2, particles, etc.) and deposition of reduced and oxidized nitrogen to marine and terrestrial eco-systems.

The model has also been applied for more than 20 years in the Arctic Monitoring and Assessment Programme (AMAP) in several assessments to study the atmospheric transport to and deposition within the Arctic of sulphur, sulphate, ozone, NOx, VOC’s, lead, Hg, Black Carbon, POPs and others and has been a reference model in AMAP.

The DEHM model has through the years been included in a number of international model intercomparison exercies including other similar state-of-the-art models from both Europe and North America (latest e.g. AQMEII phase 1 and 3) and for different areas (Europe, North America and Arctic).

DEHM is part of the EU-funded CAMS-50 ‘Regional production’. CAMS-50 is a large project under the Copernicus Atmosphere Monitoring Service (CAMS), providing air quality forecasts for Europe based on a number of European models (http://macc-raq-int.meteo.fr/). 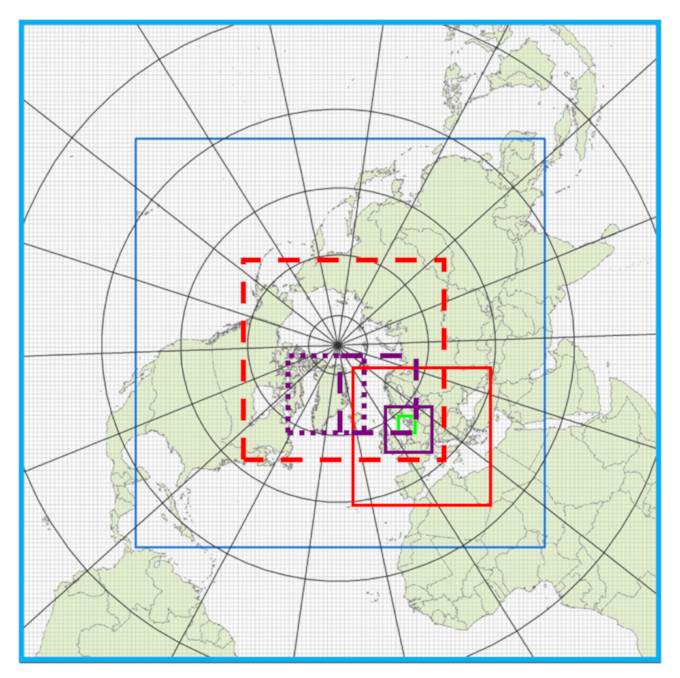 Fig. 1: The DEHM model domain and examples of nested domains, with higher resolution. The spatial resolution of the model ranges typically from 150 km x 150 km to 5.56 km x 5.56 km.