This part of the Danish inventory only comprises a full data set for all substances from 1995. From 1995 to 2000, there has been a continuous and substantial increase in the contribution from the range of F-gases as a whole, calculated as the sum of emissions in CO2 equivalents. This increase is simultaneous with the increase in the emission of HFCs. For the time series 2000-2009, the increase is lower than for the years 1995 to 2000 and after 2009 the emission has been decreasing. The overall increase from 1995 to 2019 for the total F-gas emission is 12.7 %, while emissions decreased from 2009 to 2019 by 60.9 % mainly due to decreasing emissions of HFCs. SF6 contributed considerably to the F-gas sum in earlier years, with 28.6 % in 1995. Environmental awareness and regulation of this gas under Danish law has reduced its use in industry. A further result is that the contribution of SF6 to F-gases in 2019 was only 17.5 %. The use of HFCs has increased several folds. HFCs have, therefore, become even more dominant, comprising 71.2 % in 1995, but 82.3 % in 2017. HFCs are mainly used as a refrigerant. Danish legislation regulates the use of F-gases, e.g. since January 1, 2007, new HFC-based refrigerant stationary systems are forbidden. Refill of old systems is still allowed. 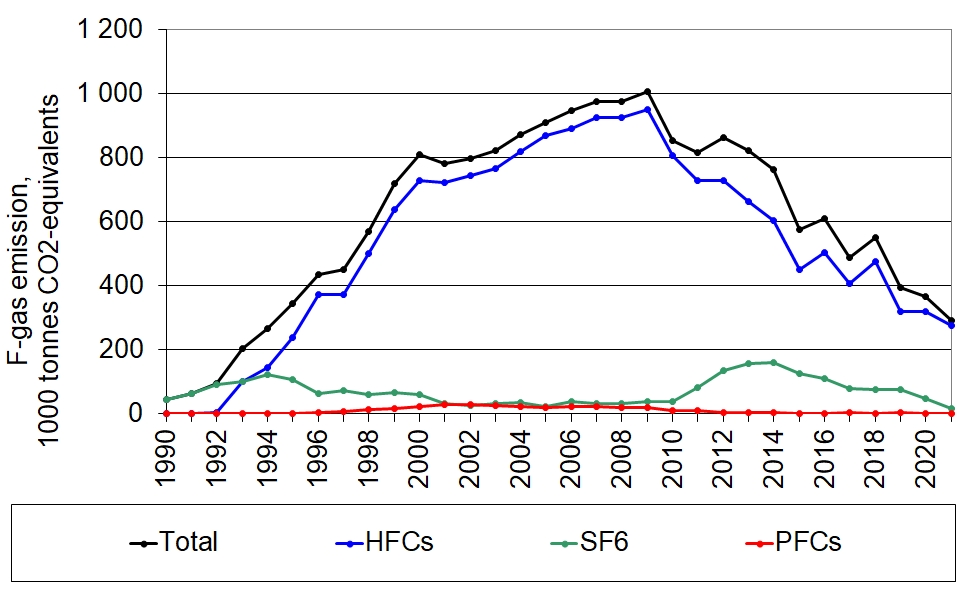