Solid Waste Disposal Sites constitutes a sub-sector in the waste sector. In the Danish emission inventory system CH4 emissions from solid waste disposal sites are calculated with use of a first order decay as recommended by the IPCC in their guidelines.

From 1994 to 2005, the number of registered solid waste disposal sites (SWDSs) landfill sites in Denmark has decreased from 176 to 134. There are 56 active disposal sites (SWDS) existing today, reporting to the new waste data system. Methane collections from 29 of these SWDS are reported to be used at energy-producing installations in the Energy statistics in 2019.

Solid Waste Disposal on Land is the dominant source in the waste sector with contributions in the time series varying from 87 % (1990) to 52 % (2017) of the total emission, given in CO2 equivalents. Throughout the time series, the emissions are decreasing due to a reduction in the amount of degradable waste deposited. Comparing 2017 with 1990, the emissions from SWDS have decreased with 61 %. 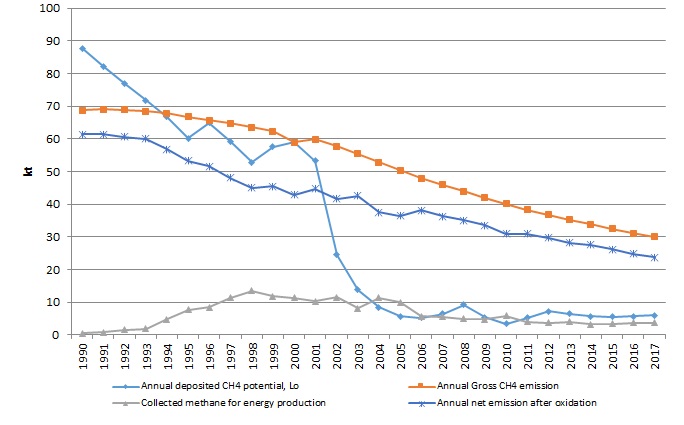 The general development for solid waste at disposal sites is a result of action plans by the Danish government called the "Action plan for Waste and Recycling 1993-1997" and "Waste 21 1998-2004". The latter plan had, inter alia, the goal to recycle 64 %, incinerate 24 % and deposit 12 % of all waste. The goal for deposited waste was met in 2000. Further, in 1996 a municipal obligation to assign combustible waste to incineration was introduced. In 2003, the Danish Government set up targets for the year 2008 for waste handling in a “Waste Strategy 2005-2008” report. According to this strategy, the target for 2008 was a maximum of 9 % of the total waste to be deposited; a target was already met in 2004 where 7.7 % of total waste was deposited according to Danish waste statistics. Waste Strategy 2009-12, part I was the sixth waste management plan or strategy adopted by the successive governments dating back to 1986. Waste Strategy 2009-12 set up targets for 2012 according to which a maximum of 6 % of the total waste produced were to be deposited. It appears that this target was already been met in 2009 where only 5.6 % of all produced waste was deposited. Waste Strategy 2009-2012, Part II includes goals of continued decrease in the amount of waste being deposited in Denmark and an increase in reuse, recycling and recovery (Danish Ministry of Environment, 2010). This report includes an evaluation of the capacity of Danish solid waste disposal sites divided into waste classes: inert, mineral, mixed and hazardous waste. The same waste classes are defined in the new Statutory Order for Landfill (Statutory Order no. 719, 24/06/2011), which refers to the Statutory Order for Waste (Statutory Order no. 1309, 18/12/2012) regarding characterisation of the waste according to the European waste code system; the EWC-code list included in Annex 2 of the statutory Order no. 1319. The New Danish Waste Reporting System (www.mst.dk) is based on the EWC-code system. Based on the new waste reporting system, waste amounts have been identified and allocated according to 18 waste types characterized according to individual content of degradable organic matter and half-life.

The decrease in the emission throughout the time-series is much less than the general decrease in the amount of waste deposited. This is due to the time involved in the processes generating the CH4, which is reflected in the first order decay model used for calculating the yearly methane emission from solid waste disposal sites in Denmark. 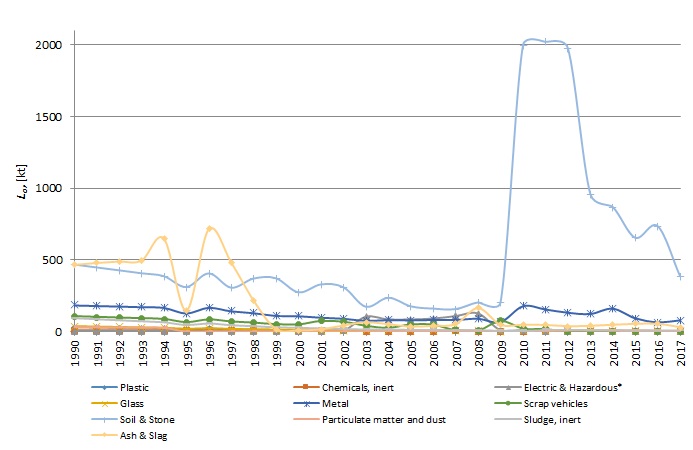 Figure 3   Time-series for degradable organic waste deposited for the years 1990-2017. 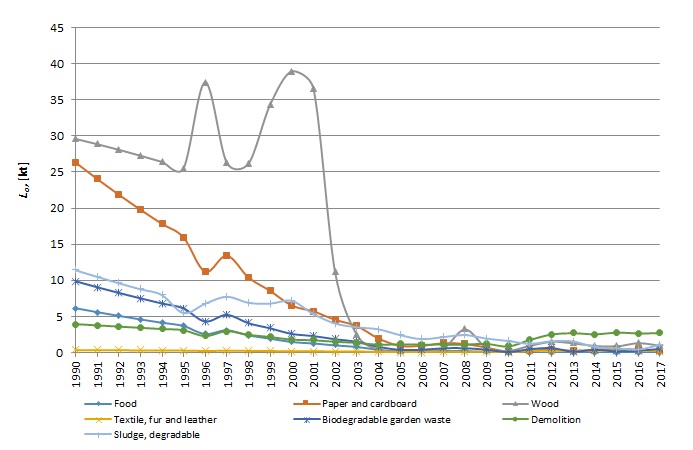 Figure 4   Trends in the national amount of composted waste. 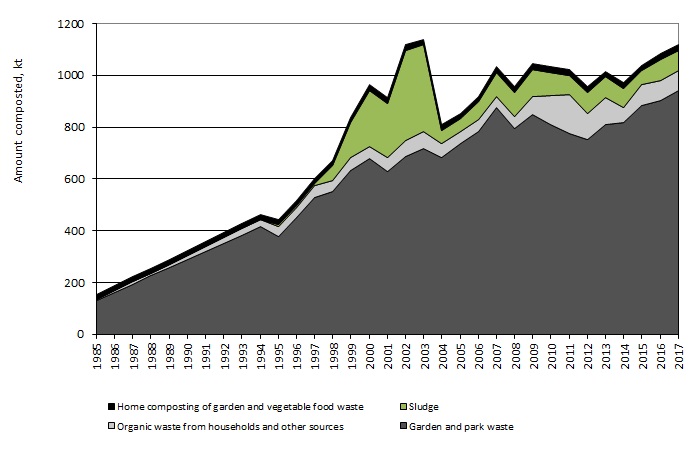 Incineration and open burning comprised by emission from human and animal cremations. CO2 emissions from animal and human cremations are considered biogenic.

Figure 5   Trends in the emission from animal (AC) and human cremations (HC). 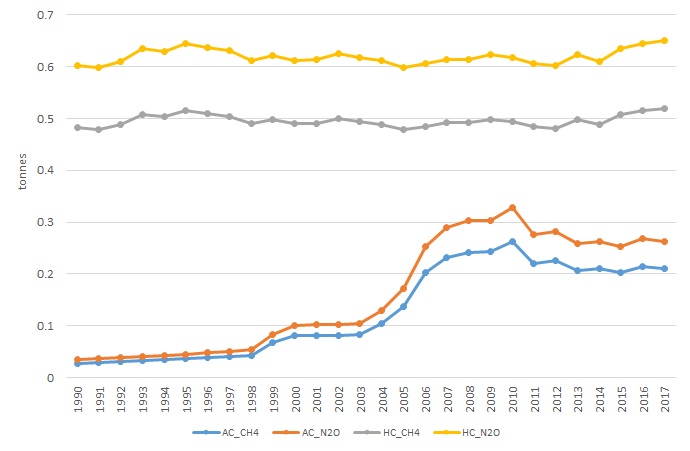 Figure 6   Time-series of CH4 emissions due to venting (CH4,AD,net), mechanical and biological treatment (CH4,sewer+MB), scattered houses (CH4,st) and the total methane emission from wastewater treatment for the years 1990-2017. 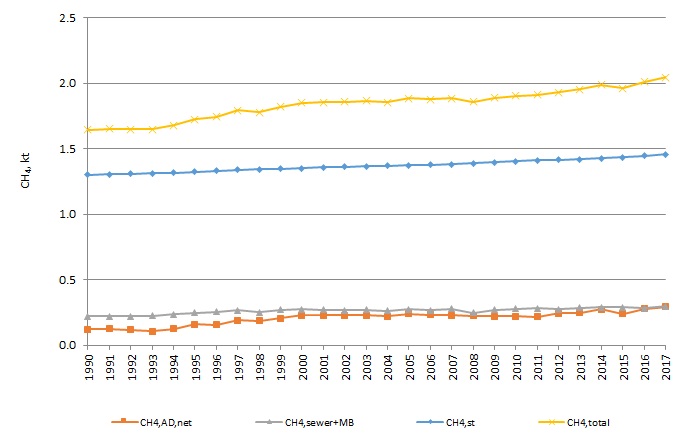 The emission of N2O from wastewater handling is calculated as the sum of contributions from wastewater treatment processes at the WWTPs (i.e. direct N2O emissions) and from sewage effluents (i.e. indirect emissions). In addition to sewage effluents from the Danish WWTPs, indirect N2O emissions, includes separate industrial discharges, rainwater-conditioned effluents, effluents from scattered houses, from mariculture and fish farming.

Figure 7   Time-series of N2O emissions from wastewater treatment and discharge. 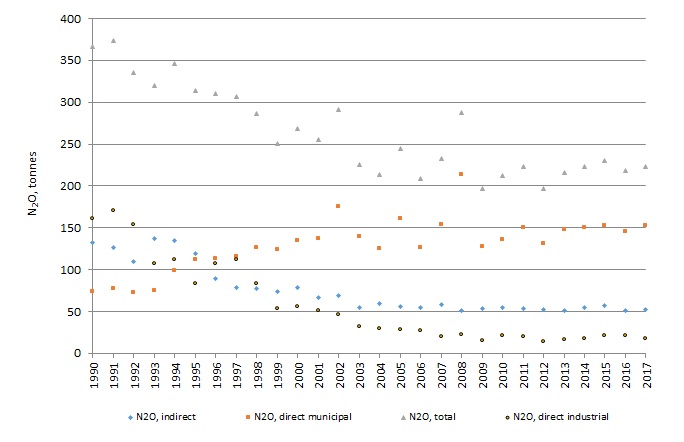 The annual fluctuations is caused by several factors such as e.g. climatic condition such as variations in precipitation and as a result varying contributions to the influent N and varying characteristics of especially the industrial contributions to the influent. Furthermore, infiltration of groundwater, as well as exfiltration of overload rainwater and wastewater contribute to the “noise” or fluctuation in the trend of the calculated N2O emission.

Other is comprised by the subcategory accidental fires grouped into accidental building and vehicle fires.

Figure 8   Time-series of CO2 and CH4 emissions from accidental building and vehicle fires. 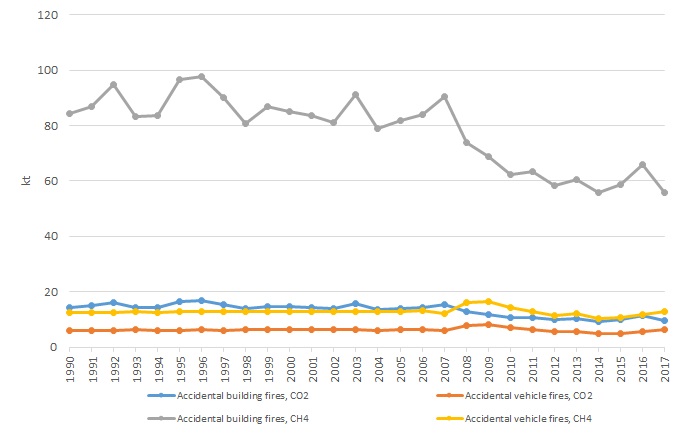